yet croons of loneliness and love
of damaged hearts and Him above
beating speeding into frenzy
a cry, a sigh, as in a daze he

tells us that it’s closing time
that nothing’s happening, life’s divine
we’re left hungry parched and breathless
in the silence that he’s left us.

Posted by Susan Borgersen at 7:41 PM No comments: 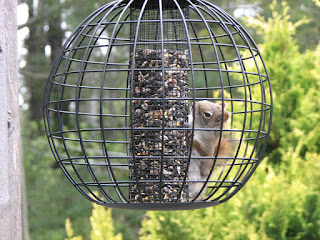 This is the latest in squirrel proof bird feeders. I've just sent this photo to the suppliers!
Posted by Susan Borgersen at 7:23 PM 4 comments:

Sorry for the delay - the Blogger problem is now solved. New updates to Elemental Legacy on my artysue blog, follow link above.
Posted by Susan Borgersen at 9:17 AM 1 comment:

If you are unable to attend all the work will be on the website once the shows open!

Words Undone # 11 - catch my latest short ficition
Posted by Susan Borgersen at 11:51 AM No comments:

The Verdict.
He charmed, you loved him. He punched, you crawled. He thumped, you cringed. He spent, you scrimped. He guffawed, you smiled within, keeping notes; a daily journal, with photos, secreted beneath the boards.
You cried, he lashed. You shared, we schemed. You smiled within, as over the edge we pushed. He lay, mouth agape with sorry, secreted beneath the boards.
The jury is still out.
© SB 2011
Posted by Susan Borgersen at 11:46 AM No comments: 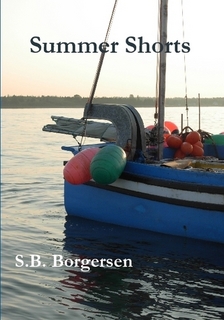 The Colour of Music

The Colour of Music
by
S.B. Borgersen
Whitey plays his steel drums on the pink sands of Elbow Beach. He cannot see the teeming mass of sunbathing bodies, but he knows they are getting his vibrations. Occasionally he catches a burst of applause and a request for The Banana Boat Song, which he ignores
His friends think he’s crazy, beating away in the blasting heat, “Why you do it?” they ask.
Whitey shrugs, “s’good man,” his generous mouth opens in a white smile.
They wouldn’t understand if Whitey told them it’s better than ganja; seeing the colours of the music. If he told them he sees turquoise and amethyst as he plays One Love, and golden shades of autumn when he plays Buffalo Soldier. Not red but a gleaming silver when he plays Red, Red Wine and glorious purple when he plays Pass The Kouchie. Licking Stick smothers everything in emerald green and No Woman No Cry, is the yellow of tansy.
At the end of the day with his head full of colour, Whitey kicks back on his porch with a bottle or two of Red Stripe, and then and only then, does he hear the music he has played all day.
© SB Borgersen April 2011
Posted by Susan Borgersen at 9:40 PM No comments: