It really feels like an ascent.  Still climbing, the clouds almost touchable, the view becoming quite extraordinary and still not out of breath.  It has been a busy year.

The arts and literary magazine ArtAscent appeared on the international scene early summer.  The theme, appropriately, emergence. I'd just written a story of the same title as part of my online writing group's weekly muse.  So I sent it in to ArtAscent. I was delighted when was accepted for publication. And then I was paid! More delight! 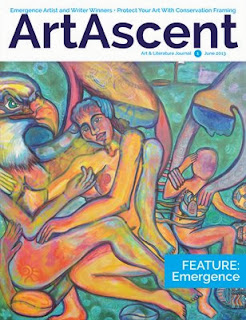 ArtAscent, a bimonthly journal carries no outside advertising, is a magazine with a classy feel and even classier look.  It is a keeper.  All contributors get their contact and web details published alongside their art or writing. The editorial staff are superb.  It is also timeless in a way; unlike other magazines, previous issues can be purchased.

So, having found myself in the very first issue, I was not to be daunted when the call for submissions was announced for the second and thought I'd give my photo art a chance. I toyed for hours with the images, using fancy software to manipulate them into something with clever messages etc. But in the end I felt they had to go off in their own honesty. The theme was Mother Earth. The photos were taken on the red sands shore of Prince Edward Island this May. Sent them in. Held my breath. Three images were accepted, two in the centre-fold and one finished up on the back cover of the mag.  The camera?  An old Nikon Coolpix I won in a draw in 2007! 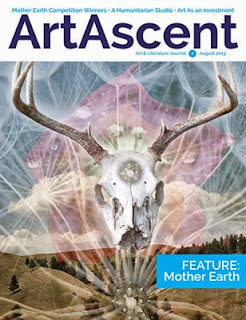 Issue # three's call for submissions left me pondering. Figures was the theme, as many of you know I have a mountain of life drawings going back over 20 years. Should I send a couple? Give my 2D art a chance?  In the end I wrote about my mother and her sequence dancing. I stumbled over of the details and technicalities of the dance form. I emailed the draft manuscript to Mum. She reviewed it, made suggestions and emailed it back. She will have her 90th birthday in December. The story was accepted. It is called The Sequence Dance. I have never been more thrilled. It is her success too. 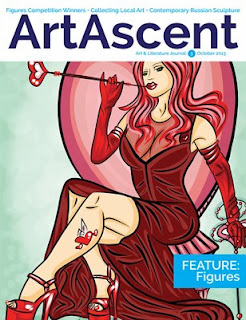 So, still in the ascent I am now fitted with all the climbing gear I could possibly need to reach my goal - it's called confidence and courage of my own convictions. For that gift I thank ArtAscent.

Posted by Susan Borgersen at 12:31 PM No comments:

A pale April early morning light hovers on the window ledge.  In the maple tree outside the bedroom window, the chickadees add an enthusiasm that does not match mine. Ready to stumble into yet another busy day, I fumble for my clothes. But freeze with my knickers in my hands. I’ve never really given them any thought before. I generally just rake them on, pull on jeans and sweater then hot-foot it to the kitchen to get things underway for yet another day.
This is the opening paragraph to a story local author Sue Borgersen submitted to an international anthology publisher this summer. It was written shortly after the tragedy that hit the clothing factory in Bangladesh. In the creative non fiction piece, Sue compares conditions there now with Stanfield’s here in Nova Scotia 100 years ago. She called the piece Knickers.
“I don’t generally write non fiction,” says Borgersen, “but this was something I was compelled to do. I was shaken by the tragedy. I had no intention of submitting it anywhere for publication. But I did. Then I was blown away when I heard it [the story] had been accepted.”
The anthology, Foreign and Far Away, explores the relationship between people and the landscapes and settings they live in.  An eclectic range of writing evokes the diversities, similarities, connections and misunderstandings of life in foreign places through 38 short stories, 37 non-fiction articles and 19 poems from expat authors and poets around the world and was launched worldwide on Monday.
But Sue received an email from Bangladesh last week, the day another ten deaths occurred in a factory fire. It was from the spouse of the EU Ambassador, who is currently fighting to get improvements in the Ready-Made Garments Sector.  ...Your story will be read at the launch here in Bangladesh on Monday...
“So the story did find the right place in the end. If it gives people cause to think, even act, then it and I will have done our jobs. For me, that is the real job of an author, whether it be fiction or otherwise,” says Borgersen.
Book Aid International will benefit from the proceeds of the anthology. This charity increases access to books and supports literacy, education and development in sub-Saharan Africa. They provided 543,280 new books to over 2,000 libraries in 2012 and have sent more than 30 million books to partner libraries since 1954. For more about Book Aid International, see www.bookaid.org. .
Foreign and Far Away is available via Amazon at a price of $10.99. Contributors live in, and have written about, more than 50 countries across every continent.
Sue Borgersen is a long-standing member of the Writers Federation of Nova Scotia and the international writing group, Expat Writers.
For more on Sue’s work go to www.sueborgersen.com 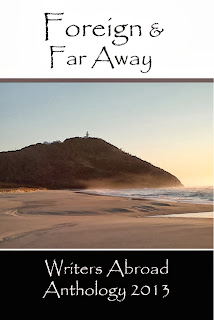