I Was in Labour for Three Days

For me, the International Three Day Novel Contest is akin to a surprise pregnancy. I say surprise because I am always shocked that I actually fall. Again.

3DNC is reported as being ‘not for the faint-hearted’. If that’s the case I must be a bit of a hard-hearted old biddy because this was my third time.

It costs $50 to put yourself through the roller coaster of joy, torture, euphoria, gloom, delight, exasperation and a whole host of other worthy emotions. It is also a commitment; you are not going to cough up the fifty bucks and then not do it. Are you?

It is always held, appropriately, Labour Day Weekend, so I can only assume it was first intended, 36 years ago, for lonely people as an alternative to a family/friends gathering for the last fling of summer. Don’t worry, I’m well blessed with family and friends which is just as well as you need the full support of your nearest and dearest. They’re the ones who make sure you’re fed and watered at intervals; when you’re sequestered away from midnight Friday to midnight Monday, writing your little socks off, you don’t want to die of starvation. Do you?

This year I signed up but had no inspiration. I had no clue what the ‘novel’ would be. Nada. But just over a week before, I was picking around in a local antique store and tripped over some old (very old) cancelled passports. There was a curiousness about them. A novelly smell. The fact they’d been kept in a box with old id cards and photos. And the fact that they had been issued in Valparaiso, Chile. I held the inspiration in my hands. The two passports cost me twenty bucks. I’d now spent $70 on this this nebulous novel.

By midnight Friday I was champing at the bit, foaming at the mouth, spitting tacks: in short - raring to go. After nine short days of waiting, the labour pains kicked in. I couldn’t wait to write my opening sentence and to get to know my protagonist. So before I hit the hay that night, all I wrote was: 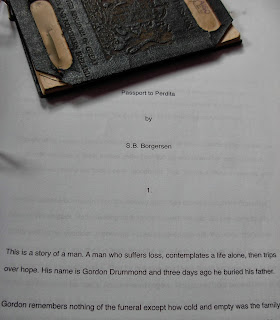 And with that I happily toddled up to bed and slept like a babe, unlike previous 3DNCs when my midnight oil-burners charred down to their final flicker. When I woke after eight the next morning, chapter one was already rattling through my head. The weekend was cathartic. It was a journey into chinks of memory, to realms of imaginary meals and illuminating conversations, to settings only possible with the help of ‘google street view’.

I also had no idea that Gordon’s father would turn out to be a bigamist.

By 10.30 pm on Monday night I typed -The End - I was done.  A new draft novel, albeit a tad underweight, was born. The following morning it was emailed off with its witness statement to defend its future. Its sentence I will not know until next Spring. In a strange way, letting it go so swiftly has left me feeling bereft. At a loss.

Passport to Perdita wouldn’t exist without this challenge. If it were a NaNo novel it would certainly be different (having 30 days instead of 3 creates a different rhythm) - and there is no money to part with either, so - the commitment is not necessarily quite so acute. And unlike a NaNo novel which is a private/personal manuscript - the 3DN will be read.

So I now have three 3 Day Novels: Minerva’s Letters, Gecekondu, and Passport to Perdita. They are like my children, one (Gecekondu) has left home now and is doing the publishers’ circuit.

You incubate them; these characters, these stories, these situations. You live intensely with them, always hoping they will take flight. And then when they do...

...of course, there’s always Nano kicking off in six weeks or so. But do I really want to add a sixth nano novel to the dusty pile? 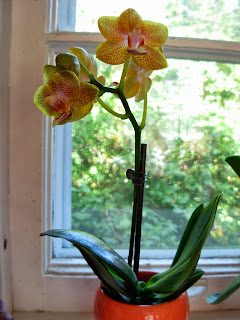 A little congratulatory gift to myself

Posted by Susan Borgersen at 4:29 PM